Home Electronics All You Need To Know About Wireless Monitors System 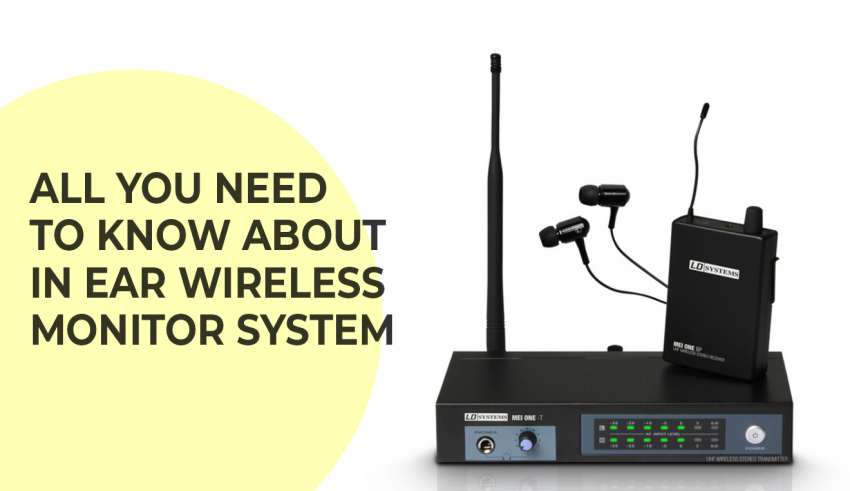 In-ear monitor System also abbreviated as IEM, have been on the market since the late 80s when they were first introduced, which is relatively a short period. It was only until around in the early 2000s when they became more affordable and has become a revolution in the touring industry, becoming an important system to be used today for many live acts as it gives the performer more freedom on stage.

As it has become a revolutionizing system as it has resulted in many uncluttered set designs, the freedom of movement around the stage and even better performances through the interactions with audiences. The use of wireless microphones and in-ear monitors can be seen on many tours that famous singers and bands perform at.

What Are In-Ear Monitors?

So for those of you that have no clue what in-ear monitors are here is a simple description on them.

The use of an in-ear monitor system is used on stage and helps you monitor what is occurring on the stage through the use of earbuds. Through using them the stage volume is reduced and the performer or singer is aware of what’s happening on the stage regardless of what position they are in. As they are usually sound isolated, they would have to rely on what they hear through the earphone and won’t be able to hear the crowds reacting or what the room sounds like- it takes a while for a singer or performer to get used to the new environment that they are now put into, but the simplest solution would be to take out one of the earbuds.

The IEM can be either wired or wireless, in which it is more common to see them used as a wireless format. Many people that haven’t seen what the system may look like it is best to know that they are a two-part system, it would consist of a transmitter, half-rack unit that would transmit the monitor mix wirelessly that would be through radio and picked up on a receiver that is a belt pack that the performer would wear, this belt pack is the size of a mobile phone that is used today that can fit into pockets or clipped on the pants. Learn more about how to buy In-Ear Wireless Monitor System Online.

What Makes In-Ear Monitors So Great?

There are a few reasons that make an in-ear monitors system so great, it is important to see the advantages that they offer and to why exactly are they used so commonly.

Starting off the in-ear monitors help all musicians, either they are singers, keyboardists, guitarists, drummer or the technician, using the monitor will help you have a better and more accurate representation of the sound that is onstage.

They would block out all of the unwanted background noise that may distract you and have the instruments or music play directly into your ears this way you have better attention on what you need to do. You will hear exactly what you need to hear!

Through the use of the in-ear monitors, they help reduce the risk of noise-induced hearing loss, which is a common problem that many musicians had faced against whether they were old or relatively young. Usually, when an in-ear monitor has no been used, after their performance or practice at rehearsals due to the loud sounds it may result in a ringing sound in your ears that shows symptoms of tinnitus which is a noise-induced hearing loss.

Though in-ear monitors help you hear directly through the earbuds and blocks all of the external ambient noises that are being emitted, you can reduce the volume of what you hear, this way you don’t risk damaging your hearing.

Being a performer isn’t easy when you have something that would be holding you back on all your movements that stage monitors do and restrict areas you can cover as if you are too far from the monitor you won’t be able to yourself sing. But using in-ear monitors you have the freedom to move around freely and no problems occur whilst performing.

One of the best and higher-priced IEM would be the Shure PSM1000 that offers a dual-channel system that is more focused and recognized towards the touring musicians that seek for a wireless monitoring system this one is the best option to go for.

It is bound to not disappoint in quality, with its bodypack receiver and both the stereo and mono modes available, and is overall built to withstand all the outcomes that the life on the road would bring to it. Offering a network control via an ethernet connection that would ensure an even high-channel-count so that it may not hinder the process of setup. It is known and reviewed to have a clean and strong signal, it also compatible with the PSM900 transmitters and the receivers.

Finally, the monitors can be controlled through a remote control that is included within, this is all thanks to the ‘wireless workbench software’.

One of the most standards that are used within the industry, the Shure PSM300 includes the transmitter and the SE112 earphones that are very comfortable on the ear and will no matter what provides all musicians with the most reliable and accurate sound through their isolation they provide.

Having a range of up to 90m of in-ear monitoring with a one-touch frequency that would sync with the pack and provide a clean channel within seconds. Using the SE112 earphone that is used by many professions worldwide as they are comfortable and have proven to provide high sound isolations.

Shure also supplies more earphones that all are sound isolated, though each model has different price ranges that they fall under they all are very well known and liked by many.

All of these systems would be highly recommended by many people in the industry as they have been used a countless amount of times.

Getting A CMMS For Your Small Business – Advantages And Disadvantages