Ever since technology advanced creators and innovators have carried out many experiments to create diamonds and other precious gems. Though in the early years they did fail many times, as time progressed their innovations improved and they were gifted with miraculous achievements. 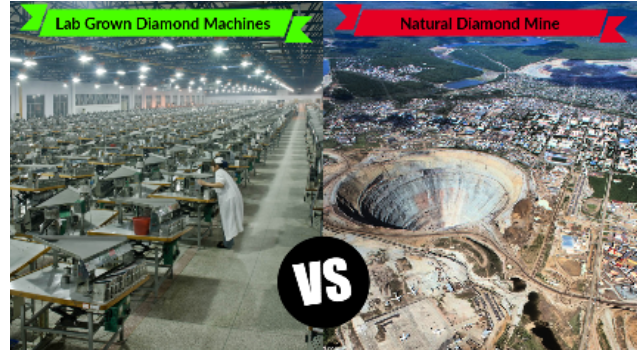 These engineered diamonds are created in labs, inside chambers under a controlled environment. The conditions re-created inside these chambers are similar to the conditions inside the earth’s crust which result in the formation of natural diamonds. Methods like CVD diamond & HPHT synthetic diamond creating method is used.

The man made diamond industry was worth 16.2 billion in 2016 and is expected to reach 27.6 billion by 2023. This is a massive rate of increase and many reasons favour the growth of the man made industry. According to a report put forward by MVI Marketing, it stated that about 70% millennials in the US said they would prefer buying a man made diamond for engagement rings (Source: cnbc.com). The report also stated the benefits: (25%) environment-friendly, (24%) no association with blood diamonds, (18%) mined diamonds are expensive and able to buy bigger carat and size engineered diamond (11%).

Man made diamonds though engineered in labs,possess the same intrinsic properties as natural diamonds. Making them real diamonds and not fake diamonds (big misconception). How so? Well, let us explain.

How is man made diamond created

HPHT synthetic diamond are those diamonds which have been created under ‘High Pressure and High Temperature’. These are the same conditions which are required to form a natural diamond from scratch.

CVD diamonds are those diamonds which have been created by Chemical Vapour Decomposition. In this method a man made diamond is formed, with the help of a hydrocarbon gas mixture. A carbon plasma is created over a tiny diamond seed, onto which the carbon atoms will be deposited to form a man made diamond.

Both of these methods produce man made diamonds or lab grown white diamonds. Coloured diamonds can also be produced; by adding chemicals during the formation phase. The lab created fancy shape diamonds have the same optical, physical, and chemical properties as natural mined diamonds.

Natural diamonds are formed about 100 miles inside the earth’s crust. At that point, the required high temperature and pressure is achieved, which then forms diamonds. These natural diamonds are grown out as carbon traps in rocks, which after coming under the influence of 2000°F and high pressure get converted to white diamonds.

A similar method known as HPHT synthetic diamond making method is used in labs to produce lab grown fancy diamonds. Advanced technology can produce a pressure of 5 GPa at 1500°C, leading to similar conditions which are found inside the earth’s crust. This results in the formation of man made diamonds.

History of man made diamonds

READ  Finding the Right Inventory System for Your Company

A few centuries ago when natural diamonds were striving, if someone would have said that making of diamonds in labs was possible, that person would become a laughing stock.

Many scientist and inventors tried different methods to produce man made diamonds, but they all failed. It wasn’t until in the 1890s, Henri Moissan created a diamond by heating a piece of charcoal to 3500°C inside a carbon cubicle. Several people tried to copy and improve this method but were unsuccessful.

However in 1954, the first man made diamond was formed by the HPHT synthetic diamond making method. This was done by the GE invention of the belt press. It put apressure of 1.5 million pounds/square inch and applied temperatures over 2000°C. Using this belt created an HPHT synthetic diamond. The CVD diamond making method came after the HPHT method.

Man made diamonds and natural mined diamonds are indistinguishable

Both depict similar physical, chemical and optical properties making them visually similar to a great extent. Expert gemmologists are the only beings which can determine the difference between the two types of fancy diamonds, that also with the help of a specialised set of equipments. All certified man made diamonds are inscribed so that they can be distinguished from natural diamonds by experts.

Man made diamonds are certified by authentic institutions

All man made diamonds are sold along with a certificate, if a seller isn’t providing you with a certificate, demand for one. Lab grown diamonds should always be accompanied by a certificate otherwise they will not be considered authentic. Certification institutions like IGI (International Gemological Institute) which are widely renowned are great places to get certificates. Diamond buyers and sellers depend on IGI diamond grading reports to calculate the value of a diamond.