Home Life Style What is the Better way to Treat Herniated Disc? Chiropractic or Orthopedic? 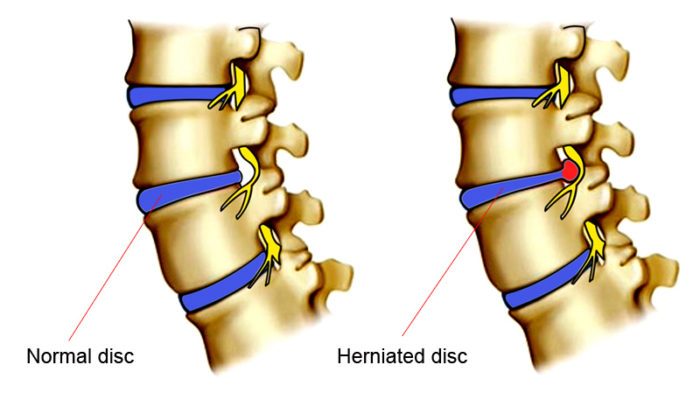 What is the Better way to Treat Herniated Disc? Chiropractic or Orthopedic?

A herniated disc is a spinal problem. It occurs when the bones supporting the spine are misplaced. The spinal disc is more like a jelly doughnut. The inside is soft and its exterior is hard. The problem starts when the soft portion from the inside is forced to tear the hard exterior and is moved out. Most common part is the lower back but, the disease can occur in any part of the spine including neck or anywhere else in the spine.

The causes of this problem are typical. It occurs due to the unnecessary strain, or because of some injury faced while playing sports or any other activity. One thing must be kept in mind that herniated disc can also take place naturally; apparently showing no reason at all.

It’s only because the bones and discs in the lower back area including the whole spine are degenerating with the increasing age. One more factor to be noted, this problem also exists on genetic terms. Research has shown that families are facing this issue because of their history with the herniated disc.

The symptoms of this disease depend on the serious effects of pain one is experiencing. Generally, lower back pain is the most common. That pain usually travels and affects the nervous system. Sometimes the disease is there, but the patient might not feel any pain or experience very low levels of it.If not captured at the beginning, the continuous pressure upon the nerves will lead the pain in the buttocks, legs and finally into the foot. All this pain happens in one leg and foot right or left.

READ  5 Tips For Picking The Best Warmest Socks For Hunting

To confirm the sickness, you have to visit the neurosurgeon to diagnose it properly and clear all doubts about other possibilities. There are several ways for diagnosis listed as under:

X-Rays are very common to give you a clear idea about the spine. Moreover, there is a CT or CAT Scan an advanced form of X-Ray and displays what’s happening inside the spinal bone with all its complete structure. The Magnetic Resonance Imaging presents the inside of the spine in a 3D form through which you can clarify whether it’s Herniated Disc issue or some other tumor, degeneration or some other enlargement in the surrounding areas and nerve roots.

Myelogram states whether the pressure is occurring due to the Herniated Disc or some other tumor or spur bones.The last option is Electromyogram and Nerve Conduction Studies. This diagnostic procedure records the electrical impulses of the nerve roots, muscle tissues,and peripheral nerves. This test will clear out whether the pain is due to Herniated Disc or because of some other internal injury and nerve compression.

When faced with issues of neck and back pains, patientsusually visit the orthopedic surgeons. These two are very common; one is Chiropractic and the other one is Orthopedist. They are also looked forward to other issues in bones, muscles, tendons, and joint problems. When it’s Herniated Disc issue; the services of Chiropractors and Orthopedists are attained. Despite the difference in the treatment, both of them suggest the physical therapies on a regular note. Let us discuss both the schools one by one.

When a Chiropractor is approached, you will not be suggested to use drugs. This procedure is far away from surgery. To fix the issue properly, the Chiropractor considers acupuncture and spine adjustments method to deal with the misaligned spine. This is due to the importance of spinal health. As it is known that dysfunctionality of the spine directly affects the nervous system of a person. Moreover, other spinal health issues can also arise such as stiffness in the body, asthma, allergies, and chronic migraines.

When a patient of Herniated Disc visits the Orthopedist to come up with a solution, he/she is usually advised to take painkillers, other drugs, and injections to resolve the dysfunctionality of the spine,especially in the lower back. After trying all the remedies, along with physical therapies; if the pain is not fading away and the issue of the discs remain the same or gets worse in condition then the last option is to go with the surgery.

This happens in severe cases. Though, surgery has few side effects to be dealt with.According to one of the best Orthopedic Surgeons in Lahore, non-biological implants made up of metal or plastic are used in the surgery to fix a patient of Herniated Disc. The side effects after the procedure last for life. The implants inside the body do not grow, shift or change; and eventually needs to be replaced with the new ones.

The recovery time after the surgery is four to twelve weeks to get relieved from the chronic pains and the mobility of the body becomes limited due to the artificial implants. Slowly and steadily motion in the body is regained.

There is a list of successful surgical techniques to get rid of the issue. The best orthopedic surgeon in Lahore suggests the following to be considered if you’re going with the surgery:

READ  10 Things Your Fragrance Says About You

Finally, one thing should be kept in mind what stage you’re in according to the Orthopedic Surgeon in Lahore. If the pain is initial and you want to consider a Chiropractor to deal with the sickness then it’s a good choice. And if the Herniated Disc issue arises in you on a lethal ground and even the medicines are not useful for you then you should consider surgery by consulting experienced patients and especially some of the best orthopedic surgeons so that they can guide you about which surgery will be beneficial for you on long term basis. Health comes first, it’s a blessing and is very important. Take the best of care.