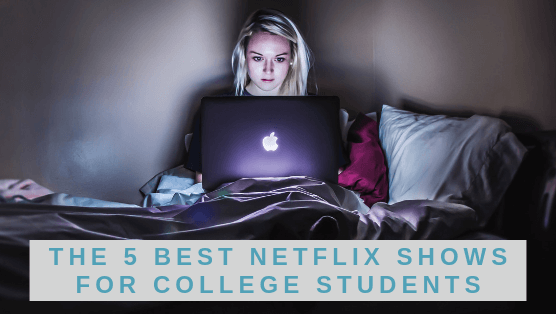 We know you’re busy. Between classes, part-time jobs, and maintaining something of a social life, it’s hard to find time to chill. But sometimes, you just have to put on your PJs and kick back for the day. And what do college students do when they want to relax?  Well, they watch Netflix, of course!

Endless shows, tons of movies, thought-provoking documentaries – Netflix has it all. But what are the best shows? With so many choices, how are you supposed to choose?

Today we’re focusing strictly on Netflix Original Series. Although Friends, The Office, and Gilmore Girls are amazing shows, let’s skip them for now. Check out this list of the best Netflix shows for college students, and find something good to binge-watch during your down time.

Unless you’ve been living under a rock, you’ve probably seen – or at least heard of – Stranger Things. It’s a quirky and mysterious mash-up of every 1980’s Spielberg movie along with a dash of X-Files on the side. But, even if you’re too young to get those references, it’s still one of the best shows to watch.

Summarizing Stranger Things is like explaining a complicated novel in a foreign language you don’t understand. But we’ll try…

A young boy gets abducted and goes missing into the Upside Down, a bizarro world where evil lurks and nothing is as it appears to be. His three buddies befriend a scared, young girl named Eleven, who has escaped from some sort of biotech lab experiment run by evil geniuses.

Eleven is one of the only people who know what the Upside Down is – plus she has some cool superpowers like being able to flip cars with her mind. It’s a well-written show that’s as equally as funny as it is thought-provoking. To say it’s a pop culture phenomenon is an understatement.

If you haven’t watched Stranger Things yet, there are three full seasons to binge right now. And we expect that Season 4 is right around the corner.

Between the money laundering, drug cartels, adultery, and Jason Bateman’s dry wit, Ozark is arguably one of the best shows out.

Seasons 1 and 2 follow the Byrde family, whose patriarch, Marty (played by Bateman) has been laundering money for a drug cartel. His wife, played by Laura Linney, has her own set of baggage (I won’t include any spoilers!).

Rounding out the family are a son and daughter. There’s one free-spirited teenage girl who’s tired of doing what her parents say and a young boy with an affinity for rifles. Despite their flaws, it’s kind of hard not to love the Byrdes.

The family has all of the day-to-day issues that any American family has…they just have a few more than most of us! The acting is top-notch. The story is fast-paced. It’s dark, exciting, and somehow manages to incorporate a bit of humor as well.

If you can stand some mild violence, it’s one to watch. There’s no official date yet, but Ozark season 3 is set to premiere in late 2019. So by the time you’re done with final exams, you’ll have a new season to binge!

If you’re not a football fan, a reality show about college football players might not sound too interesting.

But don’t write it off too quick. Last Chance U has more in common with Varsity Blues or Remember the Titans than it does with Monday Night Football.

READ  Things You Should Need to Know About Small Business Loan

This series documents the journeys of some college football players who, despite being talented, have been kicked out of school for poor grades. In a last-ditch effort to go pro, these players have enrolled in junior colleges with strong football programs.

Throughout the show’s four seasons, we get an in-depth look into the player’s lives and the teams that welcome them. We learn about their troubled pasts, the challenges they’ve overcome, and their journeys to make it to the big leagues.

We also meet the coaches, teachers, and academic advisors whose job it is to keep them on track. Each of the characters is so likable and sympathetic that it’s hard not to find yourself invested in their success. It’s dramatic, inspiring, and even funny at times—a great watch for sports fans and non-fans alike.

If you’re a fan of zombies, you’ll love Santa Clarita Diet. But let’s be clear, it’s nothing like The Walking Dead – in fact, it’s the total opposite.

This series is pure comedy, with Drew Barrymore playing a realtor named Sheila who just happens to be an “undead” person who feeds on humans. It doesn’t take long for her goofball husband to figure out that he needs to keep her fed. And it doesn’t take much effort for their way-too-smart teenage daughter to get involved in the family’s antics.

In fact, the teenage characters in this show prove that kids can be a lot smarter than their parents. It’s funny and fast-paced, and the 30-minute episodes make it a breeze to watch. You can definitely binge an entire season in one afternoon.

READ  Surprise people with special cakes at their house-warming party!

Netflix has more to offer than sci-fi thrillers, goofy comedies, and gut-wrenching dramas. They’ve also produced some pretty incredible documentaries, too. And the best one is Making a Murderer.

This 2-season documentary series is the story of Steven Avery, a convicted murderer, and Kathleen Zellner, his attorney. It follows Zellner as she introduces new evidence desperately to the court and tries to get him an appeal. At the same time, we learn all the gruesome details about the murder that put Avery behind bars in the first place.

This is certainly one that divides the room. Some walk away thinking that Avery is a cold-blooded killer. Others think he’s wrongly convicted. Either way, it’s a fascinating look into the criminal justice system, and perfect for anyone who loves the true crime genre.

If you’re in the mood to pop some popcorn, sack out in your comfy pants, and binge-watch Netflix all day, you’ve got some options. Whether you want to re-watch old seasons of Mad Men and Breaking Bad or check out something new, there’s no shortage of stuff to keep you entertained. The best part about paying $8.99 per month for Netflix? Whether you’re in the mood to laugh, cry, be shocked, or get scared, there’s always something to watch!